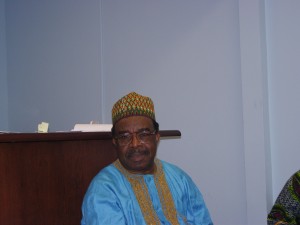 Nigeria is the biggest country in West Africa, and the most populated country in Africa, with a population of about 140 million. The country covers an area of 356,669 square miles. It is thus one of the biggest and most important countries in Africa. Because of its size and potentialities, Nigeria is often referred to as the “Giant of Africa.” It is a country blessed with abundant natural and human resources. Indeed, Nigeria is a country with international clout, being one of the largest producers of oil in the world. It belongs to the Organization of Petroleum Exporting Countries (OPEC).

The Federal Republic of Nigeria is an agglomeration of hundreds of indigenous nations, brought together by British conquest. Nigeria, therefore, was a British colony. The colony was divided into two administrative sections, namely, the Southern and Northern Provinces. The two Provinces were merged together (amalgamated) in 1914 to form the present Nigeria. In essence, Nigeria is the creation of the British Government. It became independent on October 1, 1960, and in 1963 a Republic. The capital is ABUJA, but formerly Lagos, which is an important commercial center.

Nigeria is currently under a democratic government, headed by a civilian president, similar to that of the United States. Nigeria experienced a prolonged period of military rule shortly after independence. The First Republic (1960-66) was overthrown by the military, which precipitated three years of civil war—the Nigeria-Biafra War of 1967-70. A succession of military coups brought successive military regimes. In 1999, Nigeria returned to civilian rule under a democratically elected president.

Yet no one is under the illusion that the “dark days” of Nigeria are over. The current economic and social retrogression calls for urgent political stability, economy recovery, and social rehabilitation. Measures must be taken to ensure better governance, so as to ameliorate the massive unemployment and the widespread poverty and suffering of the masses. Nigerians deserve political stability, social security, and economic well being.

Nigeria is a multiethnic nation or a plural society. This means that Nigeria is a country with many ethnic groups, who speak different languages, and embrace different religions. The three major religions are Traditional African Religion, Islam, and Christianity. Statistically, Muslims and Christians outnumber worshippers of the Traditional African Religion, or the religion of the ancestors. Although both Islam and Christianity are foreign religions, they have nevertheless become the religious heritages of Nigeria. Accordingly, elements of Islam, Christianity, Western culture, and indigenous traditions are embedded in many cultural practices. Thus, ancient indigenous practices like masquerades and secret societies, as well as primordial traditions and core values, such as the communal ethos, worldview (cosmology), respect for age, kinship, age-grade societies, polygamy etc., coexist with Islamic, Christian, and Western traditions.

Over 300 languages are spoken in Nigeria. Although none of the languages takes precedence over the others, three of them however predominate, such as Hausa, Igbo and Yoruba. Of course, the different ethnic groups speak their own languages. Because of Nigeria’s colonial origin, English is the official language of communication, administration, and trade among the educated elite. Also, “Pigin” English, a combination of English and indigenous languages, is widely spoken in the country, as well as in West Africa generally.

Nigeria has a very rich and diverse culture. In essence, customs and culture are rich and varied. In Culture and Customs of Nigeria, Professor Toyin Falola writes: “The scope of Nigerian culture is broad, reflecting the country’s past and present.” The variety of Nigerian culture and customs can easily be seen in the beautiful Nigerian works of art, clothing, cuisine, music and dance, as well as in the celebrations of annual festivals, such as the New Yam Festival, childbirth naming ceremonies and marriage rituals and celebrations. To be sure, there has been a considerable degree of culture change, brought about by several factors/forces such as colonialism, the Nigerian civil war, and globalization. In short, internal and external influences have changed or modified old customs. Indeed,

“Traditional beliefs continue to change as Nigerians go to school, receive ideas from other places, and travel to other countries. Science and formal education have reduced the number of those who believe that gods and witches are responsible for every problem. Western science has spread with Western education and has introduced its rationality. Nevertheless, many Nigerians still believe that death can be caused by the “evil eye,” witches, and all sorts of enemies; that luck and destiny account for success; and that God bestows power, wealth, and all forms of blessings. While a mechanic knows how a car works, the knowledge does not stop him from paying homage to the god of iron. (Falola, Culture and Customs of Nigeria, p. 31)

In closing, let us briefly survey the pre-colonial or early history of Nigeria. The history of various groups in Nigeria dates back to antiquity—the Stone Age (c. 12,000 BC). The Iron Age from c.500 BC witnessed the emergence of the Nok civilization, characterized by advancements in art, technology, farming, urbanization, and trade. The ancient inhabitants of the land space used iron, and cultivated the land for food. Hence technology, agriculture, and trade were integral elements to the political economy. Food production was plentiful, and hence settled populations grew. Works of art flourished. Early civilizations included the Nok Civilization (…) and the Igbo Ukwu Civilization (c. 9th century). There were also large kingdoms and empires, notably the Benin, Oyo, and Bornu empires. The Fulani Empire, or the Sokoto Caliphate, founded in the nineteenth century by the Muslim leader, Shehu Usman Dan Fodio, was arguably the largest empire in West Africa.

Historically, political systems of government were diversified. There were essentially two basic systems of government—centralized and decentralized systems of governance. The Benin and Yoruba kingdoms in the southwest, the Nupe and Igala kingdoms in the middle-belt (now Plateau/Benue State), and the Kanem- Bornu and Hausa states, were examples of centralized societies. The kingdoms and empires were territorial units controlled by powerful kings and their court officials. The kings (such as the Oba of Benin and/or the Alaafin of Oyo) wielded enormous political power, and used the army to build the kingdom/empire and to consolidate power. “Religion and rituals [also] served to legitimize the power of the kings and to unite the people.”

On the other hand, there were decentralized societies, where political power/authority was not concentrated in the hands of an individual. Anthropologists and social scientists describe these societies as acephalous, or segmentary, or lineage societies; but also incorrectly as “states without rulers.” The Igbo society, the Tiv, and a few others belong to this category. These societies are basically village democracies, where power or authority is widely diffused. In effect, there were (and still are) no paramount rulers (kings), even though, in the case of the Igbo, monarchical political systems of government existed—as in Aboh, Oguta, and Onirsha.

On the whole, the lineage or kinship system predominated. The political and social order was quite open, meaning that the political system was characterized by egalitarianism and republican ideologies. The village assembly or meeting was the all-purpose instrument of government, dominated by the elders. Hence the political system has been described as Gerontocracy. But there were several organs of power and social action. For example, priests, secret societies (e. g. ekpe, okonko), age-grades, titled societies such as the Ozo, etc. wielded some influence, or authority, in the village. In summary, “the classical segmentary lineage system was characterized by the absence of formalized or structured forms of government.” This meant that political power was not concentrated in the hands of any individual or group of individuals. Rather, there was a participatory, democratic system of government.